iamamiwhoami
Register
Don't have an account?
Sign In
Advertisement
in: Interviews, Ionnalee, EVERYONE AFRAID TO BE FORGOTTEN, Ionnalee interviews

Vital Ventures: An interview with ionnalee

The story of iamamiwhoami may be a unique tale but it was also a necessary pursuit for its co-founder and creator, Jonna Lee.

After creating two solo albums, Lee found herself unsatisfied with the conventions of the music industry and release format she was creating within. Taking matters into her hands, she left the label she was originally signed to, in order to find the space and autonomy to create in the form and pace she desired. Joining forces with Claes Björklund, the pair enigmatically began a YouTube page under the guise of 'iamamiwhoami', in which they uploaded extracts of music accompanied by enchanting visuals.

What started as a way of freeing herself from the music industry's structures she felt bound by quickly became a full-blown project in which iamamiwhoami released three album series: bounty (2010), kin (2012) and BLUE (2014). Under her own label, To whom it may concern, iamamiwhoami created audiovisual albums which embraced the digital experience by telling a stories through a sequence of songs and accompanying videos - something Lee notes has now become a norm in music. The project became the sole focus of her life for seven years in which she tirelessly wrote, produced, designed, edited and directed within iamamiwhoami.

Armed with the knowledge and experience she has gained since, Jonna is returning to solo music, under the name ionnalee. Her first single, 'Samaritan', offers something both familiar while setting out on a new path. More direct in her singing and backed by its commanding rhythm, the song challenges the heightened and unrealistic expectations of female artists today. Collaborating with Japanese fashion label Comme des Garçon, and shot by WAVE (the directorial union of Lee and John Strandh), her first video prides itself on the rich narrative and subtext which enraptured followers of iamamiwhoami.

As Lee has shown herself to be an unrelenting and determined artist, Andrew Darley talked to her about how she maintained that vision and has now reached a place where she does not care about expectations that may surround her.

Congratulations on releasing your first single in a new era of your solo career. How does it feel to have 'Samaritan' out in the world?

Thanks, it feels really good! It's been a long time since I began working on solo music, like 5 years so it's about time I gave it focus.

Was there a reason behind choosing it as the first song as ionnalee?

It's very distinctive in its message and sound for the music I'm making now. I think it's a great opener.

You are now the sole producer of your music, in which you previously co-produced with Claes Björklund. Creating now as ionnalee, you have described how you are now facing your "mirror image" for the first time in a long while. Is this a result of a new confidence you have found?

It's been a necessity to dare to take a look in the mirror without iamamiwhoami on. I was an artist and producer long before iamamiwhoami and even though the project means all to me, there's also the bigger artistic perspective of a life's work. I felt a need to see what and who I am underneath it all. iamamiwhoami was a big creative catalyst for me. So yes. More focused on what matters. I give less fucks about what other people think.

'Samaritan' describes your views on culture's unhealthy idolization of female artists and the pressures placed on them to constantly satisfy audiences. Have you personally felt a pressure in your career to keep other people happy or create what you feel is expected?

I have not since I started iamamiwhoami and my own label. The project happened as a result of experiencing what qualities in me I could work with instead of just following the stream, which I was doing before. In general, throughout my life, I've gone through the same process over and over: experience, start asking questions, why are things like this? is this a good way to do things? Then I learned how to do it myself, and I went and did it better without compromise.

In the video, we see you watch a television broadcast called 'The Road to Self-Realization'. The trajectory of your career is interesting in how you began as a solo musician, before creating the project, and are now returning to working on your own. Did iamamiwhoami allow you to gain clarity of what you wanted for your future career, after your initial solo albums?

'The Road to Self Realization' refers to the individualism of today's society rather than my personal self. But yes, iamamiwhoami has been an important process for my artistic evolution which continues into this solo venture.

Initially some fans believed that ionnalee marked the transformation or the end of iamamiwhoami, since the video was uploaded to the iamamiwhoami YouTube channel. Do you want to continue a strong connection between the two projects?

It marks a new beginning and a continuation, more than an end. But the two projects will not exist simultaneously as there is only one of me. I see it as shapeshifting and evolving.

What is the significance of 'Samaritan' being entitled 'Chapter 2'? Is it a reference to the second chapter of your solo career or second chapter in an audiovisual series to come?

'Samaritan' is Chapter 2 of a longer sequence that I'm making now.

Are you working towards a full-length audiovisual album? If so, does it have any relation to the Mouth of a River song collection you wrote during iamamiwhoami?

I released my first audiovisual album in 2010 and have made six individual projects in this format with iamamiwhoami. 'Audiovisual album' wasn't a well-used expression when we began. Through the years, our work has been labelled things like "promotional campaign", which is both comical and ignorant. Media would complain over the amount of videos being released by us during our series, when we were releasing a serial story where the music and film weigh equally. Now this format is commercially housebroken.

My projects tend to steal 3 years of non-stop work to make them happen, so I've been twisting and turning on what format is sound and exciting for me to work in. As there are no external force behind them. This is like talking about what canvas to use, I guess. So no, this is not an audiovisual album as in what you've seen from me before. I'll see what shape it takes on.

Mouth of a River is an album I made that I haven't released. I may someday. Or not.

In terms of fashion, you collaborated with Comme des Garçon, who created the solider dress we see you wear in the forest which is strikingly different to what you wear in the visuals and performances as iamamiwhoami. Do you now feel you have more space to experiment with you how dress and visually present yourself in your work?

Yes I do feel free to experiment. Instead of a seven year backstory to include with each new step, I have the bigger perspective of one's body of work to play with. It's inspiring working with Comme des Garçon. Rei Kawakubo is such an amazing artist. Rei's and Adrian Joffes work bring an alternative and important view to the fashion arena.

Since starting your own Instagram and Twitter you have shared some aspects of your personal life and what is happening for you behind the scenes. It was lovely to see the post about your dog, Ghost, which you may not have been able to post within the confines of iamamiwhoami's approach. Has it been a relief to be able to share more of your personal life and personality with people who follow you?

It's nice to be able to be slightly more individual and to get closer to the audience but I haven't felt like I had anything to say through these mediums before. Even though I'm a very digital person. I do now, but I have no intentions of sharing my dinner.

In an interview for BLUE you said that the way in which you created took over your life and that the intensity of the project could be isolating at times. You joked that you had made an island for yourself and may not be able to find your way back. In the years since, have you found a balance between your art and daily life?

Not really. Mainly because I don't have much of a daily life that doesn't include work because work is creating. I've come to realise my creative process doesn't change with the project I'm making because I create through multiple mediums. I write music, produce it, direct films and visuals, edit films, design. It doesn't show through the release of one song, but the work behind each release is immense and the team around me is very small.

We're not part of the traditional music or film business, I have developed a shyness, not to call it a phobia, to social situations. I'm happy to be able to create the way I do but things like going on tour breaks this voluntary confinement a little which is nice but very challenging.

A key intent of iamamiwhoami was to establish your autonomy as an artist and become self-sufficient. You have created your own independent world in which your vision is uncompromised. Do you ever feel like an outsider in the music world?

I feel both untouchable and locked out at the same time.

There was a period when you had health issues and there was a risk you may have lost your voice. That must have been quite frightening for you as an artist?

This is ongoing. Like hell. I have a disorder affecting my air pipes that I was diagnosed with after BLUE. It has made my perspective on making things a bit clearer. Singing is my biggest love, so yes, it's quite terrifying not knowing how things will pan out. But in the end, no one does. The new music became even more important through this.

After the BLUE era, you toured with Röyksopp and are touring again this year. What has the experience been like working with them and singing their music? Have you considered recording songs together too?

We began the tour last weekend at Coachella. It is great to work with Svein and Torbjörn. I feel the mind of their music stems from a place near to mine. We share an interest in music and the science of making it. There's been some stuff recorded. I don't know what we'll do with it yet.

Do you have plans to tour as a solo artist? 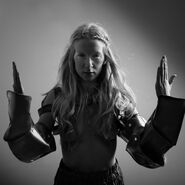