On Easter Sunday, electro star ionnalee alighted on the Bowery like a Nordic daemon, unleashing her routine blend of hypnotic aerobics and deep-synth pyrotechnics. With new album Remember The Future dropping on May 31, her tour is in full swing, attracting openers like Allie X and TR/ST and a newfound stateside fandom.

ionnalee, born Jonna Lee in Sweden, has logged 20 years as an independent artist and producer under an array of musical personae—most notably fronting enigmatic twosome iamamiwhoami. Since her re-introduction as a solo artist just last year, Lee’s alt-diva power has crystalized, conjuring a post-apocalyptic Kate Bush-meets-Bowie with clear-as-day vocals and a Comme des Garçons-produced wardrobe.

Once a niche commodity, ionnalee has gained cross-industry buzz, developing friendships with everyone from Adrian Joffe to Zola Jesus (who landed a feature slot on the new record after DMing Lee on Instagram). But despite her roots in the avant-garde (she calls her first album, released in 2007, “very bizarre”) Lee has the palpable allure of a classic pop star in her live shows: Her two-night leg in New York City saw Lee crowd-surf a throng of devotees, many of whom wielded coordinated signs spelling out her lyrics.

As her bizarro-pop campaign ripples across North America, hitting Toronto today alongside TR/ST, her new track, “SOME BODY,” is just hitting cyberspace. Here, we catch up with ionnalee about her forthcoming record and Dover Street Market collab.

So you crowd surfed for the first time at your Friday show! What were you thinking about in that moment?

[During the encore] I went to the front of the crowd, just for a hug. And then I thought, maybe I can just drop myself in. I jumped down but then they started carrying me. I wouldn’t normally do something like that… It’s really not part of my [vibe], to crowd surf. I did it really awkwardly at first, because I didn’t want to lay down at first. But I felt like I trusted them.

How did you first start making music? Where did that drive come from?

Well, I've been active for 20 years. I’m quite old in the game [laughs]. When I was 18, I released a very bizarre album. I’ve always stayed independent. Releasing stuff through my website. That has [always] been a big thing for me—to just try to do it all on my own. The “iam” project began with a director I’d been working with, and we had this dream of making visuals for for every song on an album. And we did that, as a group, [[[Claes Björklund]]] and I. Which then developed into this solo business.

As an independent artist in Sweden, how did you make your connections in the greater music and fashion communities?

[Those connections] are quite new because for eight years I didn't collaborate with anyone. But over time, I've been approached by or somehow met certain kindred spirits. Like I heard about TR/ST through Austra, who I met at one point at a festival as iamamiwhoami. And Zola Jesus I met on Instagram. I wish I had a big network of artist friends, to be honest. But I am just getting to know these people.

Comme des Garçons did your look for the cover, which you also wear throughout the show. How did that collaboration start?

Adrian [Joffe] and I met through Andrew Taylor Parr when he was visual merchandising director at Comme des Garçons. After buying the album Blue from our little web shop, [Andrew] emailed us and I wrote back. When I met Adrian for the first time, I kind of felt like he was me, in some strange way. So we got to know each other and that's where it started. It’s kind of like a not necessarily commercially profitable, but creative connection that we have.

You’re obviously very invested in the visual aspect of your art. Has that always manifested in your fashion as well? What’s your personal relationship to fashion?

I never wanted to wear designer items. I wanted to be on the right side of that place where fashion meets art. And think about, “Why am I wearing this at this moment?” We made everything that I wore in the ‘iam” videos. Sometimes it was repurposing a flag, or wearing [an outfit made of] scotch tape. That wasn’t very comfortable…

We hear you have a Dover Street market collaboration in the pipeline. Where will that fall, on the wearability spectrum, between wearable and scotch tape?

Yeah, I do! It's going to be in relation to the album. Right now we’re working with the idea of hypnosis. That's my sort of inspiration for it, so we'll see where it goes. 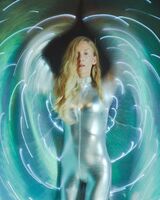 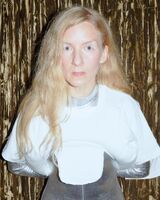 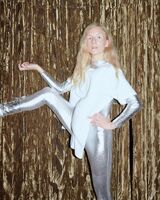