IN CONCERT is iamamiwhoami's first visual concert, performed and streamed in 2010.

Videos leading to the concert[]

"101112" is the start of a vlog style of videos by YouTube user "ShootUpTheStation." The video documents his journey from Germany to Sweden to meet an unknown group of people. He boards a plane at the Berlin Tegel Airport. Upon arriving, he takes an elevator which reads "Våning ett"(Swedish for "first floor"). He then boards a car and is driven to what was later identified as the Handen Quality Hotel Winn Haninge.

"101112-2" follows the same trend as before, with "ShootUpTheStation" arriving at his hotel, entering his room and reading through an envelope marked with the words, "To whom it may concern". The rest of the video shows what is in the envelope, a piece of paper with an itinerary on it. Each day is busy, from Friday 12 November to Sunday 14 November. The itinerary is packed with Visitors at 6pm on Friday, visitors at 1pm and 4pm, with 7pm being filled with a 'talk' on Saturday, there is a glimpse at Sunday, but no details. The video finishes here.

"101113" begins with "ShootUpTheStation" answering a ringing phone in his hotel room and telling the speaker that the camera is on. Music begins playing in the background, and there is a knock on the door. He goes to answer it, whilst the camera continues to only film the bed; leaving the viewer to guess what is happening. The sound of plastic and presumably masking tape is heard. Camera flashes are seen and heard as well, presumably for ShootUpTheStation's "funeral" photo. The video ends with a baggy-sleeved arm reaching for the camera's power button.

"101114": A bearded man, his face obscured in post-production, enters ShootUpTheStation's room and briefly teaches him how to do the waltz that takes place in the concert (whilst humming "The Blue Danube") and bow. The lesson complete, the men shake hands and the bearded man departs.

"101115": A man in braces, his face obscured in post-production, arrives with the plastic bag holding ShootUpTheStation's concert attire, which he lays out on the man's hotel bed (off-screen) before leaving. After the man leaves, ShootUpTheStation provides a brief look at the dark ensemble.

"http://towhomitmayconcern.cc/": Over the recurring visual of a corkboard to which a cutout phrase ("To Whom It May Concern.") is pinned, and featuring the (slightly different) words "10.11.16 12AM CET IN CONCERT" in pointillism, the woman's voice speaks: "At 12:01 AM Swedish time we act in concert on the wish to evolve. We will present you with a plausible path available for 6 hours on. It is what it is."

"101115-2": Uploaded just before midnight CET, it features a static shot of ShootUpTheStation's empty hotel room as he has a brief telephone conversation and someone knocks on his door.

The concert was scheduled to begin at 12:01 AM CET [6 PM EST] on 16 November 2010. A fan website (http://www.iambounty.tk/), provided a countdown clock and allowed fans to live blog the event. At 12:01 AM CET the concert did not start promptly. The concert began at approximately 12:15 AM CET, with the corkboard date notice being replaced by a streaming Flash video of the concert.

The concert video was 1 hour and 4 minutes in length. After 4 hours the video was removed, despite the assumption that it would remain up for 6 hours (as inferred from the YouTube video "http://towhomitmayconcern.cc/"). Tech-savvy fans downloaded the high-quality streaming FLV as well as ripping the audio from the file. Upon the concert's removal, they uploaded the video and audio to file sharing websites (such as MediaFire) and file hosting services (such as YouTube) for those that missed the original broadcast. (An example of a fan effort to disseminate the concert can be found at http://www.iamconcert.com.) 15 hours after the concert ended, the videos setting up the concert ("101112" - "101115-2", "20101001", "20101109", and "http://towhomitmayconcern.cc/") were deleted from the iamamiwhoami YouTube account. Although the concert appeared to be a live, "one take" tracking shot there are clear areas where cuts where used to edit segments of the concert together. For example, the transition from "n" to "o" occurs by passing by a dark tree in closeup, then cutting to a similar shot of ShootUpTheStation in the "church". The transition from "o" to "13.1.14.4.18.1.7.15.18.1.1110" occurs when the camera zooms in on one of Lee's minions' black shirt, then zooms back out.

On 4 December 2010 the full, unedited audio of the concert was released digitally on Amazon and iTunes titled "In Concert". Segmented tracks of "b", "t", "n", "o", "u-2", "y" and "." also became available alongside the complete audio. (The YouTube video "20101104" contained a lyrical fragment from ".", a new song featured only in "In Concert" until it was released again as Shadowshow on BLUE.)

In a direct continuation of "101115-2", a white-hooded figure and ShootUpTheStation leaves the hotel. A glimpse of the hooded figure's face reveals it is Jonna Lee. They board a Volvo 240 along with a driver in a ski mask. The interior is taped in plastic and holds instruments for the concert. The camera lingers over figures matching the animals from the Prelude "number" series of videos. Lee sings "u-1", with the backing track playing on the car's speakers as they navigate a highway system. The car arrives at the concert site and the view switches to an exterior video camera placed before the parked car. Lee uses a keyboard to play "b" using a harpsichord synth. She then exits and continues the song at the boot of the car. On her neck is a strawberry necklace from the Prelude videos. At the end of "b", Lee takes ShootUpTheStation by the hand, leading him from the car through concert barrier gates. They brave a phalanx of veiled laughing people, while a remix of "Prelude 699130082.451322-5.4.21.3.1.20.9.15.14.1.12" is playing in the background. When they reach a turn in the gates, Lee mimes tracing smoke in the distance, then begins "t" featuring thundering cathedral bells. Behind her, tents light up in the darkness in sync with the song's bassline. She walks away into the darkness and ShootUpTheStation follows. At a backlit tree, Lee rests in an over-sized cardboard gown. ShootUpTheStation enters the cardboard gown structure from below and "20101001" plays. Within the gown is a wood. A man holding the lightbulb from "y" lights his way. "n" begins and he comes upon the cardboard puppet from "u-1". Lee, in the distance as her incarnation from "y", with long, flowing blonde hair, awaits him. They waltz and bow, as foreshadowed by "101114", in part to a dissonant electric guitar solo. As the song concludes we see men in briefs miming sex acts on trees. The song ends and ShootUpTheStation stands alone in front of the hair-clad Lee in a makeshift church within the wood, the stained glass windows and rosette represented by white paper illuminated from behind. In the middle of the space is a cardboard box. As Lee sings a remix of "o" she sheds her hair suit, revealing a black leotard, fingerless black-lace gloves, and a prominent clerical collar at her neck. Lee beckons for ShootUpTheStation to get into the box and he is sealed inside. The song ends and "13.1.14.4.18.1.7.15.18.1.1110" begins as Lee and her minions lay hands on the cardboard box coffin. Lee reappears in a dark green bodysuit and lays down on the coffin and an image of ShootUpTheStation is turned over on her chest in a mock-funeral.

Lee gets up and dances to a new interlude as her minions gyrate at the coffin's side. The coffin is led away to a remix of "u-2". She leads the procession out of the forest, beneath the fluorescent lights from "y", and over plank bridges to a road where the car from the intro awaits. A man on the hood is manipulating a synthesizer, and the procession 'rounds the car and reaches the cardboard box fort from "u-2".

Lee buries the aluminum-foil-wrapped ashes using a shovel. She sits at a keyboard nearby, covers herself with black chiffon veil, and sings "." (a complete version of the lyrical fragment found at the end of "20101104", which was eventually released as shadowshow on 2014's BLUE) using the keyboard's organ synth as an accompaniment.

After finishing the song she covers the keyboard with the veil and dons a false tail and monkey mask. Lee walks to a table where men dressed in papier-mâché costumes of an owl and a goat are seated. Men dressed as a llama, whale, and bee join them. The owl pours champagne, Lee toasts, and the assembly each make their animal noises from the Prelude videos. When the animal calls are made in order, their vocalizations approximate the pronunciation of the English word "Bounty", thus solving the project's central riddle. The assembly drinks and the concert ends. 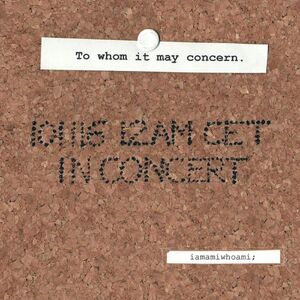