Swedish singer, songwriter, producer, and director ionnalee is as prolific as she is mysterious. For over a decade, alongside longtime collaborator Claes Björklund, the enigmatic creator helmed the electronic music and audiovisual collective iamamiwhoami, dazzling international audiences with a vast array of mixed media projects. Just last year, she released her first solo album and feature film, ‘EVERYONE AFRAID TO BE FORGOTTEN’, followed by a Kickstarter-funded world tour. Inspired by the experience of being on stage, ionnalee returned to the studio in the hopes of capturing her fans’ energetic response to her live performances. The result is a new album, ‘REMEMBER THE FUTURE’, which features creative contributions from Zola Jesus and Röyksopp.

Flaunt recently caught up with the artist to discuss her creative process and numerous collaborations, as well as her forthcoming album. Check out the interview below.

What was the process of making this new album, and who would you say are figures which have been vital to the ionnalee persona?

a lot more enjoyable than usual. it was not a planned recording; it came naturally when I had some ‘downtime’ and started experimenting in my work space. I was able to tour last year, much through the support from my fans through my Kickstarter project. that made a huge impact in terms of feeling inspired. there’s also been things happening in my life, like near ones not being well and we’ve all just needed some light to be honest, so this album is about finding it in the shittiest of times from lots of aspects. eventually this beacon became an album.

Claes Björklund and John Strandh (both iamamiwhoami collaborators) remains vital for my work. we just really do good things together.

Is there a complementary aspect of ionnalee to Iamamiwhoami, I feel like there is a more introspective aspect?

yes, that is possible. the duo versus solo aspect is most evident as I see it. writing from a projects’ vs. personal point of view. I’ve felt less cautious and careful not to ‘destroy’ the writing perspective with my own personal beliefs and opinions, as well as me being a less technically skilled producer than Claes is, I have no respect or patience for theory, I just do. I have previously been in the co-production seat with iamamiwhoami and with my solo work I’m now exploiting to be fearless as a producer on my own.

With the imagery for OPEN SEA you have worked on, is there an aspect that is more Atlantean? EVERYONE AFRAID TO BE FORGOTTEN seems rooted more in nature, I sensed something more galactic in OPEN SEA.

OPEN SEA is the first part of a little trilogy with influences from earlier space ages. I have been exploring the differences between the visionary then and now, as before we were searching for new life beyond our planet, and now we’ve started to look for an alternative place to inhabit for survival. OPEN SEA on its own is quite heavily connected to iamamiwhoami’s BLUE. Actually, that song shaped that whole audiovisual series. EVERYONE AFRAID TO BE FORGOTTEN is more earthy and grimy, and this album and its visuals are more atmospheric.

How did your live collaboration with TR/ST come along? I knew he worked on your remixes before.

He remixed NOT HUMAN for me. I loved it and asked him to produce HARVEST (from EVERYONE AFRAID TO BE FORGOTTEN) and we he came to sing it with me live for the first time in LA during my first LA show last summer. We’ve since done a few live performances together. He’s really great, as well as his music. There is some common ground both musically and in mood and I believe, in values.

How do you envision ionnalee evolving? Is this just another evolution or a place which you want to explore for a longer time?

I just take every next step based on what I feel like doing right now. And I use my current reality as base for my work process. ionnalee is just me with an ‘I’ reconnecting with my own artist career spanning over 20 years. It will be my core for now and then I’ll see what mind and body allows moving forward. Have done quite a few huge audiovisual projects for the past ten years. but the future’s still unseen.

Do you find your work rooted more in the visual or sonic side?

Sonic is my backbone and visual is a ten-year-old love affair still growing strong.

How did you get involved with Comme des Garçons? Is it a collaboration for the ultimate identity of ionnalee or has it been more traditional as stage wear, etc?

I have a humble creative alliance with Comme des Garçons via Adrian Joffe, they have dressed a lot of my visual projects for the past 4 years, I also collaborate with Dover Street Market. Adrian found my work through a friend and we connected creatively. For stage I make my own wear usually because I am really physical on stage and tend to break everything, so to be completely free I build the costumes to endure this inhuman treatment. 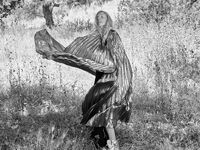 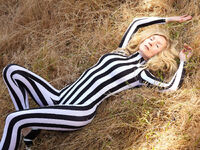 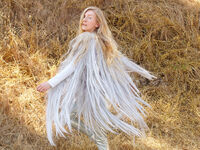 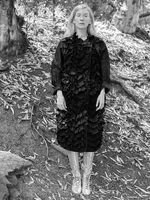 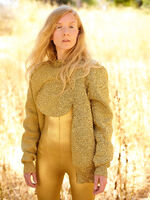 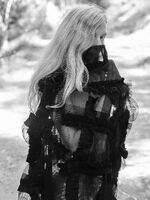